No organ is complete without a pedalboard! Again, there are different possibilities to get a working MIDI-fied pedal for your virtual pipe organ.

I did consider all the possibilities but discarded the ready to use pedals because of price. I tried to contact a large organ buider in my area to get a used pedalboard, but they didn't have any at that time.

Thus I was left with the last option, to build it myself. I got great inspiration from Raphi Giangiulio's webpage www.rwgiangiulio.com/construction/pedalboard/ but since AGO pedals are VERY uncommon here in Sweden I decided to go for a BDO version instead.

When the pedal is finished it's going to be MIDIfied with gear from MIDI Gadgets Boutique (a mpc32xrs and csr32p). 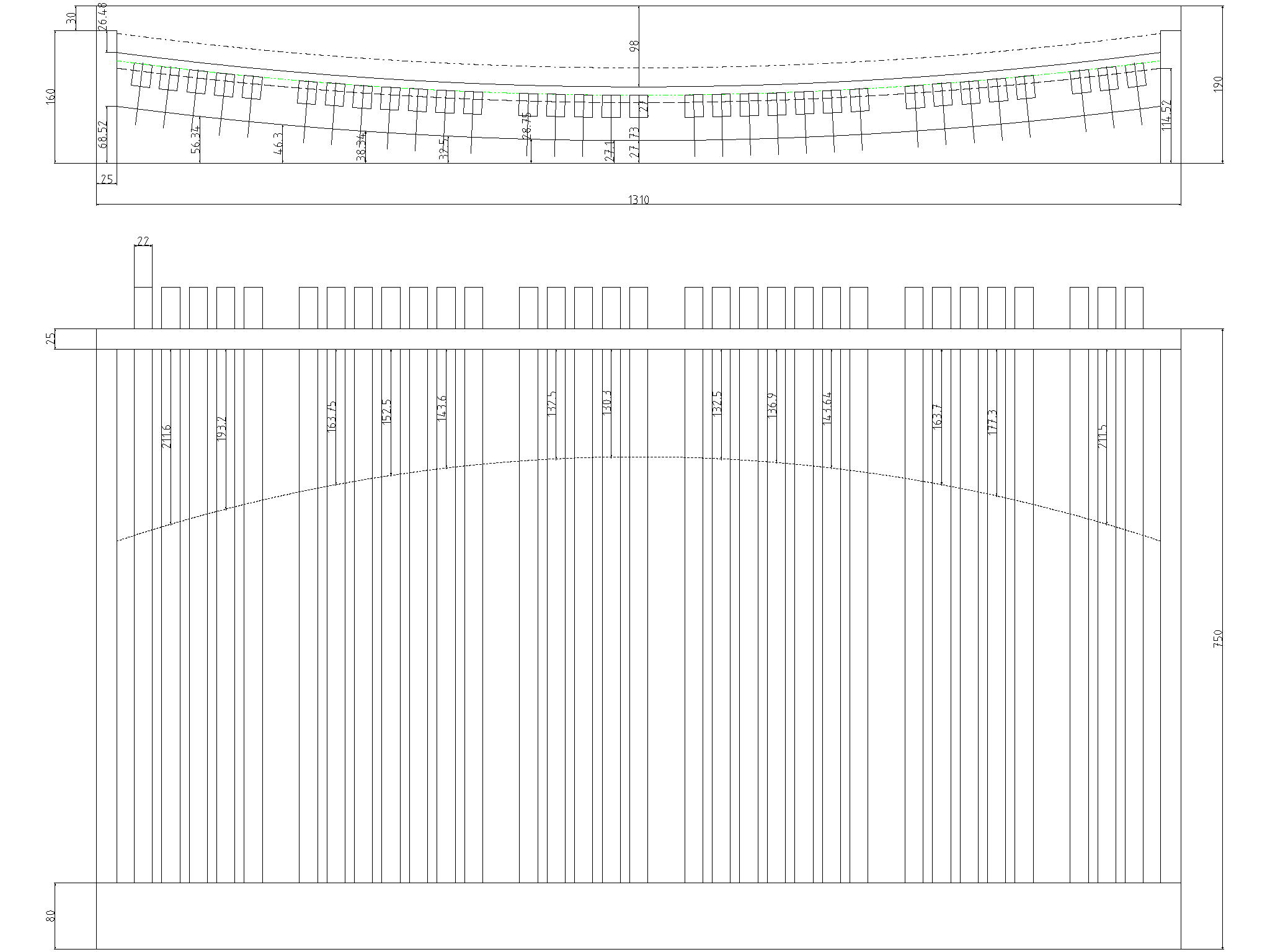 I started with a peek in the German organ building company Laukhuff's catalogue for design ideas. In their .pdf number 9 there are several different types of pedals. From that I made my own drawing and started building the pedal. The drawing is available to the right as a .png file and also as a .dxf here.

Unfortunately I didn't document the project from the beginning but loads of help with such a project I later found on Vidar Fagerjords webpage www.fagerjord.org even if this once again is of a AGO pedal.

The process of building the pedal was not that complicated though. The pedal bodies (32 of them) were cut out and planed from pine boards to 750 x 27 x 22 mm. The naturals were covered with oak strips of 610 x 25 x 22 mm. The sharps have tops made from one part pine and one part oak. Both the naturals and the sharps "toppings" are placed 10 mm from the upper front member of the frame. 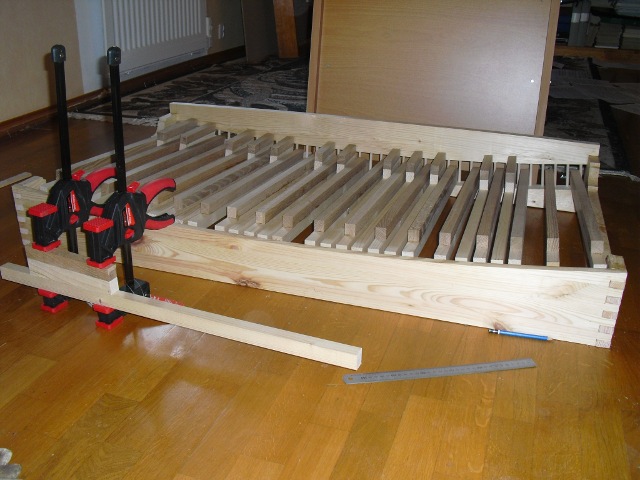 The frame was put together of actually five pieces of which two were themselves put together from two boards. Two sides, one back (one part with full width and one part to the inner measurement where the back end of the keys will be hinged), one lower front piece (made from one full width member and one to the inside measurement where the springs will be fitted as well as the lower felt) and one upper front piece. The joints were made as box joints (or finger joints) which were glued and screwed (to the inner member of the back and lower front member) together.

For the front guidance of the keys I used wooden rods that the keys will run in between (the keys will be covered in leather at that part). As hinges I, as the other examples, used thin metal sheets that were screwed to the keys. To get felt of appropriate thickness prooves to be difficult, but hopefully I'll get hold of something, otherwise I'll have to felt in multiple layers or both on the key bed and the key bodies. 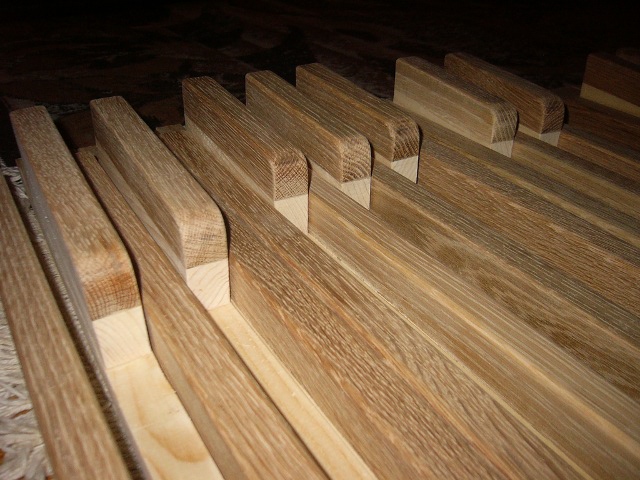 I used a router to first set a small bevel on the toppings and then rasped and sanded it to smoothness. One could have used a rounding bit on the router also but I don't really like pedals that are too round. Since this is a pedalboard I make for myself I have the opportunity to make it the way I want it!

After the construction work the somewhat tedious job of painting the frame, staining and laquering the keys is the next step. I used a alcohol based stain for the sharp's toppings with a dark oak color.

As laquer I used a polyurethan based laquer normally used for floors. Multiple layers and carful sanding with a fine paper in between to get a smooth and beautiful surface that the feet won't get stuck on. 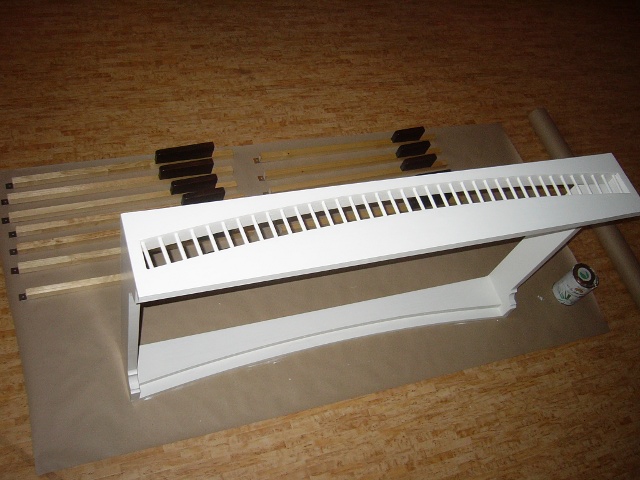 The frame was first painted with a white base color and then a laquer based antique white color on top of that. At some point I thought about other colors, but since I haven't decided on any specific console style or layout I just went for white to easily be able to change it at will later if need arises

Something quite dramatic happens when the pieces of wood that one previously have shaped into the dimensions needed and combined to the necessary shapes gets their surface treatment! The pieces suddenly comes to life in a very satisfying way for the builder.

I think that the whole process of building, in this case woodworking, is very rewarding. It's certainly much quicker to either buy a finished product or get a used pedal to MIDIfy but for me this is something really special 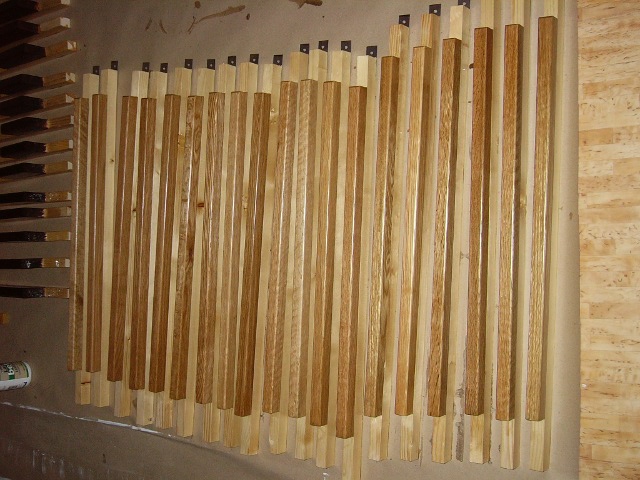 Besides, this project when finished will look good! I'm not at all a very skilled carpenter, but I learn with every project I undertake, and the joy of playing something made by oneself is unparalleled.

Finally I got thick felt from Poland! My mother-in-law visited us and took a few meters strips with her that I could use both for the upper and lower front frame members.

I also bought leather of reindeer (around 0.5 to 0.8 mm thick) that I used on the front part of the key bodies so that the keys would go silently in between the guide pins. This also reduces the sidewards play of the keys to a minimum. 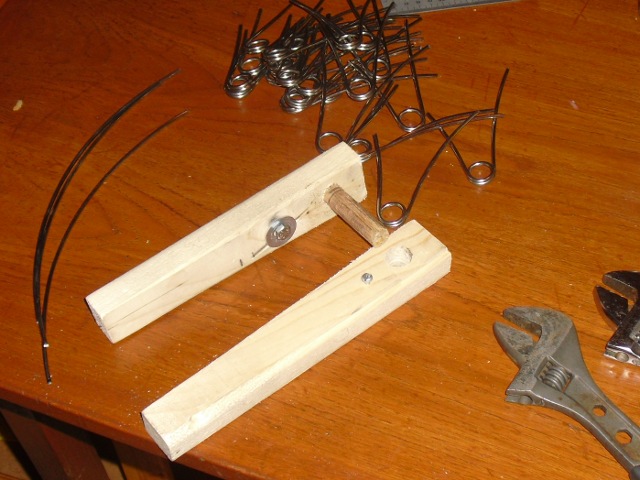 After some trial and error, I got piano wire of 3 mm thickness to make springs. This is actually more than enough but I thought it was best to be on the safe side as it's easier to make a spring weaker than to make it stronger.

For the spring making I made a tool from some scrap pieces of wood. The tool consists of two pieces. One piece has a thick rounded pin that the spring will be wound around, that piece also has a simple mean to fasten the 26 cm long wire that will become the spring. The other piece has a hole for the round pin and also a screw slightly protuding so that the wire will be guided around the round pin as I push the piece around.