After having completed the keyboard stack and pedal I could play any sampleset I had just fine with GrandOrgue on the computer. But of course I had a mess of cables and everything was movable around in relation to the other parts, not to mention that it collected lots of dust.

When I got an opportunity to get an old electrical organ that was going to be discarded I decided it was time for me to "upgrade" my vpo setup. The old Holmsjö organ was not really working as it should anyway and it was a quite small two manual instrument of highly questionable musical quality to begin with so I didn't feel bad about slaughtering it for what I needed. 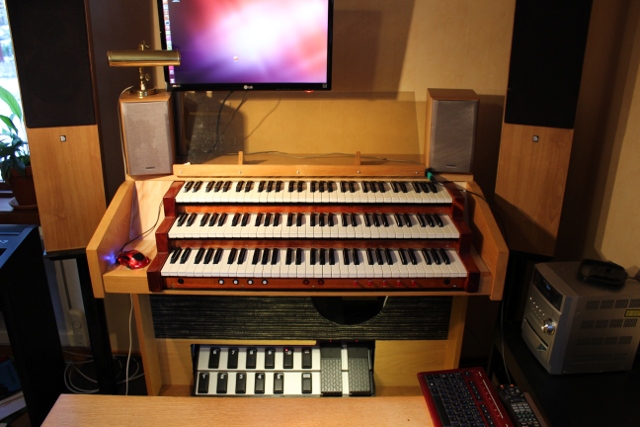 Basically I ripped everything out of it and kept just the caseing, bench and pedalboard since they were adapted for eachother. Then I put my three manual keyboard stack into it and adjusted its position against the pedalboard. I filled up the little remaining space that was left on either side and made place for the computer inside the case.

My own pedalboard that I've made earlier wouldn't fit into this console so I decided to move the electrical MIDI parts from it to the new pedalboard. Some small renovation of the pedalboard from the Holmsjö organ was necessary like putting new felt instead of the foam that had become brittle or hard, or both…

Then I made a new front strip for the lowest keyboard that would contain buttons from the MIDI pedal card that I didn't use before. Some of them are quite useful for performing different tasks, other are plainly playing the notes that no longer exist on the pedalboard anymore (the new one has 27 notes instead of 32). Some serious wire work was neccessary to connect the pushbuttons on the strip with the MIDI card. 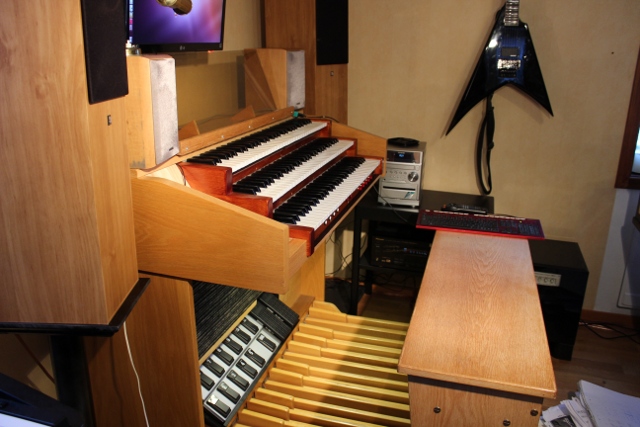 GO can of course differentiate between them, but they did get different port numbers with more or less every reboot, not to mention that they also interferred with the soundcard as they all were treated the same by ALSA. Thus I also had to change the audio setup for more or less every reboot as the order of the devices could change randomly. Finally I found a software based fix for that issue that I've published on a page of it's own for those who are interested. The same problem could also be solved by using different hardware but I kind of liked the simplicity and low cost of using USB MIDI devices.

For stop control I either use mouse or keyboard shortcuts, but for serious pieces requiring lots of stop changes I usually program the combinations into the "sequencer" built into GO giving you 1000 free combination slots (each .cmb file) and step them forward (or backward) as needed.

I should also mention that I'm nowadays using the 7.1 (analogue) audio output from the computers soundcard. Since I had one 5.1 receiver since before and another 2.0 stereo available I choose this inexpensive way of getting 8 channel audio output even if it means that I have to switch on two different amplifiers. I mainly use the multi channel option to play different divisions on different pairs of speakers to get a more diverse sound.

I hope that this little write-up can inspire others to create their own vpo consoles that's both very rewarding to play on and not that expensive at all to build, provided you do the work yourself!